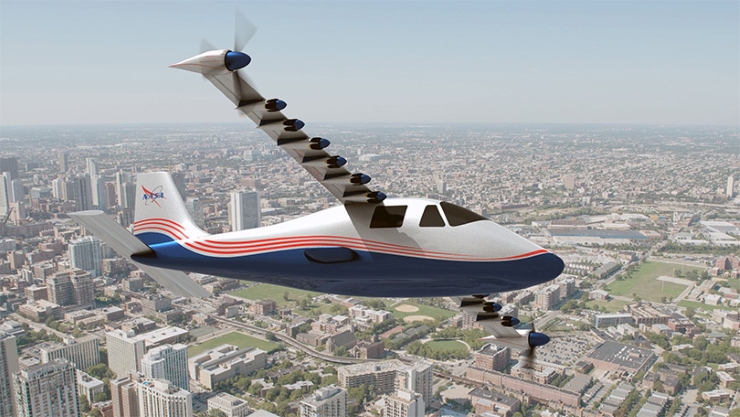 The lift augmentation has nothing to do with Magnus lift (or the Coanda effect). It is simply an increase in the dynamic pressure across the entire streamtube of the wing.

At the low takeoff and landing speeds (slightly above a 61 knot stall speed), the induced velocity of the propeller almost doubles the velocity that the wing sees; and the lift is a function of the effective velocity squared. But due to swirl and other effects the wing doesn't experience a 4x increase in lift, but about 2 to 3 times.

The objective of the inboard propellers is not to achieve a high propulsive efficiency, instead we want those inboard props to achieve high induced velocities - think of them as part of the high lift system (which happens to also provide thrust redundancy).

In fact landing is the critical case, and having lower propulsive efficiency (and a poorer spanwise lift distribution because of the swirl effects) is helpful in creating sufficient drag. The inboard props are not active in cruise flight, but simply fold against the nacelle (many motorgliders already do this type of folding on the nose).

By only using the wingtip propeller at cruise, we're able to achieve a ~95% propulsive efficiency (versus 75 to 85% with a typical fuselage nose propeller installation). The reason for this is because we have lower blockage and scrubbing drag, as well as being able to take advantage of the strong wingtip vortex by rotating against it. Since electric motors don't experience a power lapse with altitude (because it's non airbreathing) we have far too much power at altitude anyway so by only using the wingtip motor it doesn't cause much penalty in motor weight (and electric motors achieve ~6x lower weight per horsepower than a reciprocating engine).

In terms of batteries and range, the key is to achieve high efficiency cruise flight and it looks like with current batteries a 200 mile range is achievable. By adding a small <50 hp range extender motor, the aircraft will be able to achieve ~400 mile range. We're currently designing an X-plane that will fly in 2017 to substantiate all these numbers, with the ground test rig (wing and truck) providing an aerodynamic database to validate our analysis.