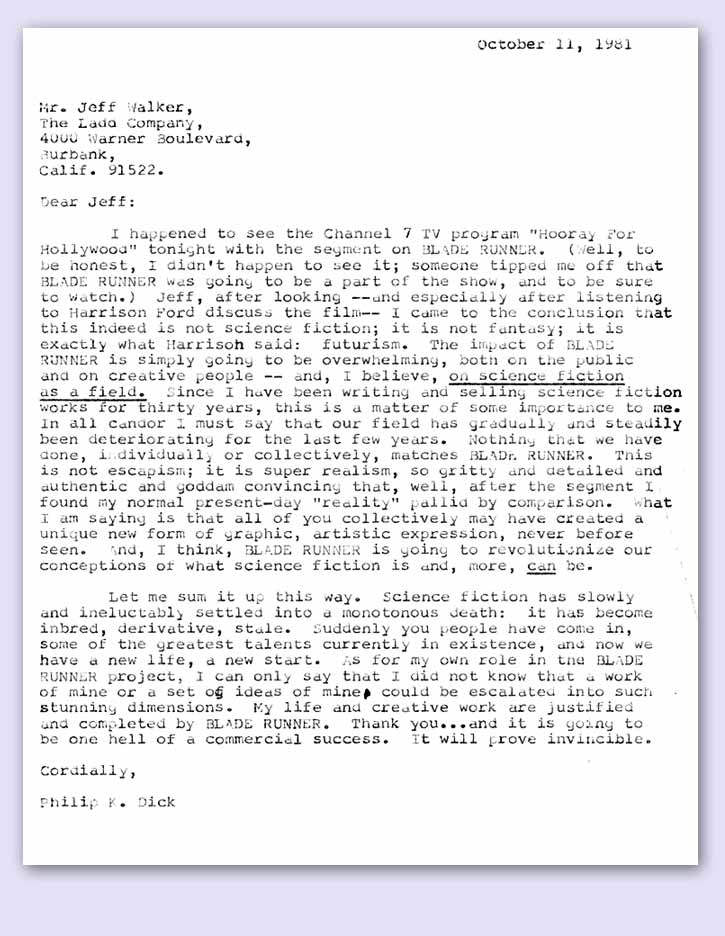 Philip K. Dick only met Ridley Scott one time – the day Phil was invited to view the special effects months prior to the Blade Runner premiere. Sadly that would be the only one of a few clips of the film he would see. He also saw something on some TV show. Phil passed on in March of 1982.

Having known Phil for almost ten years, our friendship had grown to the comfort level you usually only get with the passing of years. I was with him or talked on the phone almost every day the last year of his life. The year that included the visit to the studio where we saw the models for the sets and some of the props and other cool stuff. That day is burned into my mind . . . even these 35 plus years later.

However, the special effects that Phil saw that day were what really won him over. (Insert the “I loosened it for you” thought here.) We sat next to each other with Ridley behind us. About eight people were in the studio standing around while a woman photographed us.

It was explained that the music we would hear was not the one to be used in the film. The opening scene from the film played, followed by scenes with the blimp, the city, and the flying cars. As scene after scene progressed, I felt Phil’s entire mood change.

When the clip ended, Phil turned to Scott in amazement. “You captured the exact mood I was going for in my book! I can’t wait to see the entire film be cause this was very impressive. It’s like you could see into my mind.”

The Other Side of Philip K. Dick.

“So first we gave him a quick tour of the EEG shop, which I thought might settle him down. But Dick didn’t seem impressed, even when we showed him all the preproduction art and the actual models we’d used for certain effects shots. (Then, after Dick and Ridley had a meeting), we went into the screening room.”

“Dick was a bit guarded at first,” recalls Ridley Scott. “Until we doused the lights, turned up the music, and ran the reel for him,” adds Dryer.

However, according to Blade Runner’s coeffects supervisor, “Dick didn’t say a word at first. He sat there for twenty minutes like a statue. Then the lights came up, and Dick turned around to me. He said in this gruff voice, ‘Can you run that again?’ So the projectionist rethreaded and ran it again.

“Now the lights come up a second time. Dick looks me straight in the eye and says, ‘How is this possible? How can this be? Those are not the exact images, but the texture and tone of the images I saw in my head when I was writing the original book! The environment is exactly as how I’d imagined it! How’d you guys do that? How did you know what I was feeling and thinking?!’

“Let me tell you, that was one of the most successful moments of my career,” Dryer concludes. “Dick went away dazed.” 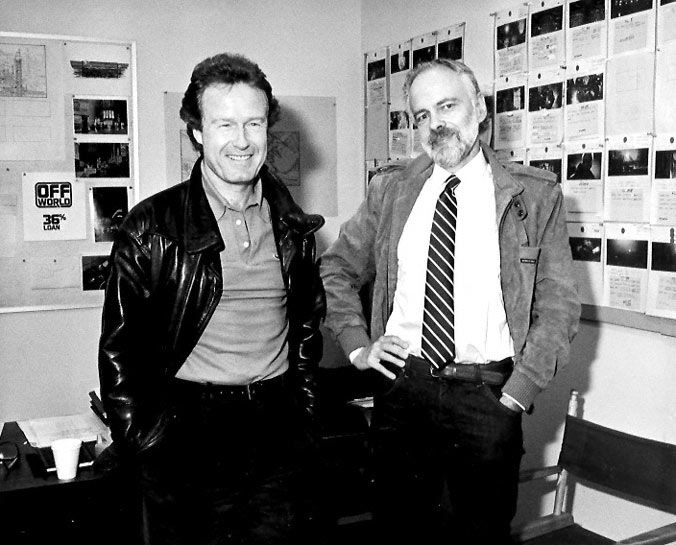