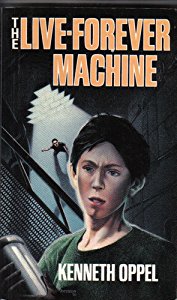 Alexander, guardian of the secret of immortality, only wants to preserve the past. His nemesis, Coil, will do anything to destroy it. Within the eerie museum, and deep below it in the city’s subterranean depths, Eric becomes the pawn in a life-or-death struggle for control over the Live-Forever Machine.

“How is one made immortal?” Alexander hesitated. “It would seem like madness to you. At night, under the eye of the moon, there are certain rituals that must be observed, incantations read aloud. But that is the least of it. When that is done, the person must immerse himself in deep water and drown.”

“I told him that he had destroyed only my working papers in the fire. I told him as well that he had missed one very important piece of the machine—the mechanism that enables a person to unmake himself or others. I warned him that if he did not cease his wanton destruction, I would cast him into the abyss of time.”

“Could you really do that?” Eric asked. His mind was beginning to cloud. It was too much all at once, too much to keep straight.

“Yes. If you drown a second time, you are unmade.”

It was unlike any machine he’d ever seen, old and new at the same time. It was shaped like the spire of a Gothic cathedral. It bristled with copper wires and electronic components, multicoloured bundles of cable, tiny video screens, panels of twinkling lights, long levers and pistons like something from the undercarriage of a locomotive. Turning cog-wheels meshed like the insides of an old-fashioned clock. A spiral of steaming tubing surrounded the base of the machine, funnelling water in from pipes along the storm drain.

“You did it, then!” Chris said with a grin. “Coyle must’ve drowned. You did it!”

“What do you—?” Eric didn’t understand.

“He drowned. If he drowns a second time he’s unmade. Right?”

Eric hadn’t even thought about it. There’d been too many other things clanging through his head. He nodded slowly. Ending someone’s life, even someone insane and dangerous—it wasn’t something you could be proud of. But they’d done it. They’d saved the museum. Still, it didn’t seem anywhere near as important as having Chris in front of him right now.